One of the most recognizable voices of television history is Charlie Brown’s teacher, Mrs. Donovan. You only have to listen to her voice for a few seconds for your mind and body to be jolted back into those hard, plastic middle school chairs.

Often, and unintentionally, Christians who share the gospel with people from different age groups, socioeconomic classes, genders, or racial identifications come across just like Mrs. Donovan. Although the information is both important and shared in a sincere manner, we, as Christians, fail to present the information in a relevant manner for our audience. I learned this lesson the hard way while facilitating Bible studies for the Navigator’s with a non-profit called Urban Hope.

During my first year at Duke Divinity School, I learned incredible information about the Bible, and I tried to pass this knowledge on to my students. Although my lessons were creative, I frequently left our Bible studies realizing that I had failed to connect the Bible with the student’s lives in an impactful and meaningful way. Where did I go wrong?

I found my answer in Christopher Edmin’s book, For White Folks Who Teach in the Hood… and the Rest of Y’all Too. Edmin rightfully points out to teachers that a student’s context and culture are not barriers that must be overcome. Instead, because a student’s perception of the world is primarily informed by his or her culture, culture is an indispensable tool that must be utilized.

The responsibility of the teacher, mentor, or friend sharing the gospel with someone is not to persuade the individual to abandon his or her culture in order to understand the Bible. Instead, Christians must sincerely be both present among and learn from different cultures. Only then can a Christian wholesomely demonstrate how someone’s culture can be cherished and embodied by the teachings and practices of the Bible. This wisdom from Edmin’s book became an important guide for me to follow as I developed Bible studies during this past season of Lent.

On Easter, two weeks after the murder of Stephon Clark, an unarmed black man shot by Sacramento police, Christians around the world proclaimed that “Christ is risen.” Yet, in the wake of Stephon’s death, for many, including myself and my students, this belief felt like a mirage. Christ had come to set the captives free, yet Stephon’s life was still bound to an unjust world and legal system (Luke 4:18). How could I communicate the reality, relevancy, and potency of Christ’s resurrection to students who live in a world in which black people are still held captive? I knew we needed to begin in the students’ culture.

So, we started our Bible study by examining this artwork: 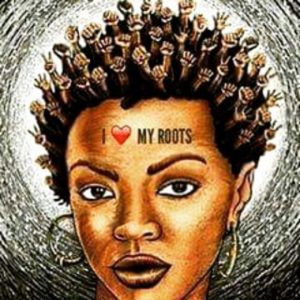 For us, this piece of art illustrated the innate, sacred worth of black bodies and black culture.

Next, the students and I examined Kendrick Lamar’s song “Pray for Me.”This song voiced the despair, pain, and sense of isolation that we felt after hearing the news of Stephon’s death.

“Tell me who’s gon’ save me from this hell

Without you, I’m all alone

Who gon’ pray for me?

Take my pain for me?

Save my soul for me?

The song ends with the rhetorical question, “Who need a hero?” The answer, we discovered, is “us.” We desperately needed a hero, but as the police officers opened fire on Stephon Clark, God did not intervene. God was not there.

Before this lesson, neither I nor the students would have considered turning to Psalm 22 to process the loss of Stephon Clark. Yet, when read alongside Kendrick Lamar’s song, Psalm 22 became a powerful way of welcoming God into our space of mourning and loss:

Why are you so far from saving me,

By communing with one another first through the elements of rap music, our culture became a space where we encountered God. Because the Bible study had demonstrated that the student’s culture was a gift, they were able to experience spiritual insight. And this approach is not unique to Edmin. In fact, Jesus used this method as he taught shepherds and farmers about the love of God being “like a shepherd who will abandon ninety-nine sheep for the sake of the one lost sheep.”

Just as it was for Christ, culture can be a vital tool for Christians to use as we communicate the relevancy of Christ’s life to other people. As we, the Church, continue to “make disciples of all nations,” what are the cultural contexts of our physical and spiritual neighbors that we must consider, listen to, and cherish, in hopes of having the nature of God more fully revealed to ourselves and others?

Xavier Adams is from Kansas City, KS. He is pursuing a Master's of Divinity with the hope of working with youth, either in a church, a non-profit or classroom setting. During the last academic year, he led a youth Bible study called Bible Jump Off. This summer, he is serving as a camp counselor at the Urban Hope Summer Camp. Xavier (left) and Urban Hope director, Brandon Hudson, posing outside the Urban Hope office.
All Posts

Xavier Adams is from Kansas City, KS. He is pursuing a Master's of Divinity with the hope of working with youth, either in a church, a non-profit or classroom setting. During the last academic year, he led a youth Bible study called Bible Jump Off. This summer, he is serving as a camp counselor at the Urban Hope Summer Camp. Xavier (left) and Urban Hope director, Brandon Hudson, posing outside the Urban Hope office.
All Posts