Even While Working at Pizza Hut 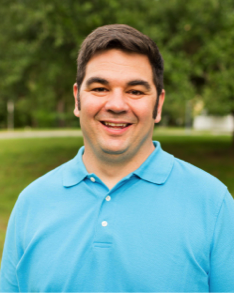 When I graduated, I knew I wanted to “make a difference” for Christ. I even had an invitation to move to CO to help start a campus ministry. But I also had a mountain of debt I knew I needed to pay off. The path forward was rarely clear, but looking back, I can see God’s gracious hand throughout. Here are a few of the “highlights” and lessons learned.

Expect at least a little chaos and disappointment. Instead of joining the campus ministry right away, we wanted to work and pay off our debts. Naively, we expected this to take a year, at most. But the job market was tough, and the only work I could find was as a temp loading auto parts into bins to ship to the nearby Mitsubishi plant. At night, I applied for jobs in CO at schools, banks, etc., anything to try and make some money to pay off loans. After I heard nothing from those first rounds of applications, I put my resume in for armored car services, restaurants… I was getting desperate. During that summer, I got exactly one call… from Pizza Hut. We moved to Colorado on a Friday, I had an interview on Monday, and I was working for “the Hut” on Thursday.

A week after I started, as I was getting new license plates, my truck blew the head gasket. That weekend, we went $5,000 further into debt buying a vehicle that could get me to work.

I was disappointed, and to be honest, a little embarrassed, that the only job I could land was at Pizza Hut. (I had worked at another pizza place in high school and was not expecting to be back there after college. My dad was angry that I had even put in an application at a pizza place.) And I was completely dismayed when we had to go further into debt – the “only reason” for getting this job (I thought) was to pay off loans.

God is in control. I wondered silently and sometimes aloud to Melissa – was this really what God had for us? We wanted to do the right thing and pay off our loans quickly, but we got slowed down before we made our first payment – was God in that? Our desire was to work for the Navigators’ campus ministry, and here I was at this “dead end” job – was God in control? Could God still use me? Was I in the right place to make it happen?! Through verses such as Acts 17:26-27, Philippians 1:12-14, 4:12-13 and Jeremiah 29:11-12, God challenged me to believe that He was in control, that He had led me to this place, that working for the good of others had meaning and purpose, that there were people interested in learning about Him and that Melissa and I could prosper.

Be faithful with opportunities to share the Gospel. During these two years, God reminded me that I just needed to be ready (1 Peter 3:15), that I was part of a larger team (1 Corinthians 3:6-9) and that I could trust Him to draw people to the light (Matthew 5:13-16).

Part of how God taught me these things was through Jason. One day, a friend of a relative (who knew I was living in CO) called about someone I should reach out to. I called Jason… and got nothing. Six months later, out of the blue, I pick up the phone, and it’s Jason. His very first question was, “Have you seen the movie Constantine.” The second was, “Is hell real?” We met for coffee, and it was clear this guy was very worried. In college, I had learned about listening for “open nerves” as a way to get to know people and figure out how I could help. Jason’s “open nerve” was hell, not a topic I usually talk about, but he was scared, and we dove in. Before I even finished explaining the details of coming to Christ, he said, “I’m in!”

This kind of connection doesn’t always happen (there were plenty of other folks from that time in my life that I talked to and worked with that never seemed interested in talking about Christ), but I learned that, no matter where I am, God put me there and can use me. At Pizza Hut, I learned to like people that are very different from me, people who lived, thought, spoke and believed differently than me. I learned how to bring Jesus into situations I never knew existed.

Through those chaotic first two years out of college, I learned that I had to trust God, both for my own troubles and for opportunities to speak to and influence others. Yes, even while working at Pizza Hut.

Ben eventually did join the Navigators’ campus ministry at Colorado State and now serves with the Navigators’ 20s mission. JBen and Melissa spent two years meeting with Jason (and his wife). Jason became a resource to help others from Jason’s old crowd (mostly folks who listen to the “Insane Clown Posse”).
All Posts

Ben eventually did join the Navigators’ campus ministry at Colorado State and now serves with the Navigators’ 20s mission. JBen and Melissa spent two years meeting with Jason (and his wife). Jason became a resource to help others from Jason’s old crowd (mostly folks who listen to the “Insane Clown Posse”).
All Posts